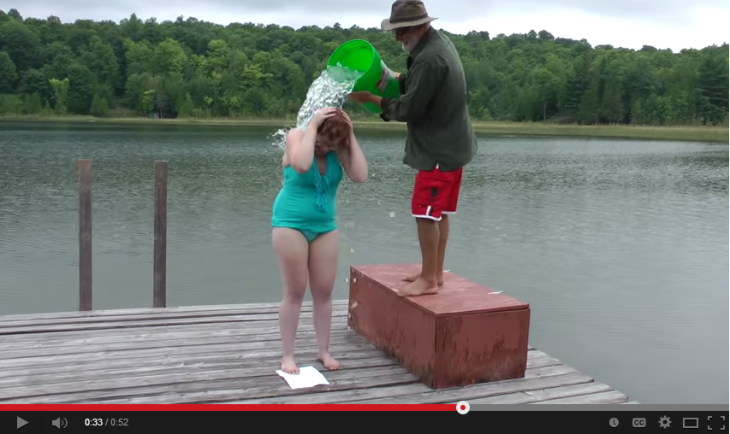 Filmed at my aunt and uncle’s cottage using lake water and ice.

If you’d like to donate please do so at alsa.org

What is ALS or Lou Gehrig’s disease?

I’m currently flourishing while taking the Library and Information Technician program through Mohawk College. My first love is writing and second is technology. I’m in second semester and using all my past credits as transfers.

As I’ve mentioned before feel free to continue following me as I will continue this as my professional blog. It will just contain more about books/library sciences versus advertising/design oriented information.

If you know of any job postings and whatnot in my area (Kingston, ON) that would be fantastic.

I am possibly paying my whole way through college next year again and I can only work summers due to the intensity of my program. I have skills and am working on improving them.

I also have a list of completed or current projects.

I honestly love when advertisers create something interesting and unexpected. Here’s a YouTube video with a video that I used in my first Ad Report for my Advertising class.

I just wanted to start the New Year off with a quick update. I will be continuing to blog about the world of advertising. I’m free of class requirements now though so I will be changing a few aspects of my posts. One part I will be changing is the range of topics; another is the word limit. Before I was limited to what the teacher was teaching and unable to write about an ad I saw on TV because I couldn’t connect it to what I was taught within the week. I’d like to vary the length of my posts as I’m working with time limits as my work load is heavier this semester.

In classes, I’m going to be working more with ad analysis and working on my Photoshop skills which are mostly Photo editing based versus graphic design based. I’ll be working on my Javascript, HTML and CSS coding skills in my spare time.

I’ve updated my menu bar at the bottom of the page.

I have moved my First 14 Days of the Advertising program video to the Current and Future Project section. I’m currently working on Cook’s Gourmet’s Facebook and Website at the moment in my spare time as well as fixing details on the Joe’s M.I.L.L. WordPress. Keep in mind that they’re still works in progress as I will be taking some photos/video later on for both.

This past summer I was seeking a summer job and applied for an office admin position via St. Lawrence College. Some of the requirements were that I had a love of music and that I was proficient in social media. I continue to work there on weekends as my school work takes up the time outside of classes. My official title is now Assistant Librarian which is pretty cool since I’m a massive book geek but I’m working for a musical instrument lending library which is awesome.

Hurricane Sandy hit the New York and New Jersey this past Monday … In Kingston area we experienced howling, high winds and driving rain. Before the storm hit where I live outside of Kingston I went into the backyard in order to batten down the hot tub cover as well as bringing our hanging art inside. The winds weren’t even that high at my house, although maybe it’s a Southwestern Ontario attitude. I’m used to snowstorms where you need to dig your way out of the house or tornadoes ripping the roofs off barns only a block away.

Last week in Kathy Patterson’s class she lectured about media buying. A classmate in my Integrated Marketing Communications class asked about what would happen if there was a power outage. I immediately thought of the 2003 blackout that affected Toronto as well as New York City. Kathy also mentioned that companies try to recoup the amount the in the event of a power out due to extreme weather. In this case there are still power outages as well as flooding within the Eastern States and Canada.

According to Kathy, an impression is the number of people exposed to a specific advertisement. For example: A person rides the bus or subway every day, they see an ad for a company.  In New York City, 4.3 million people people ride the subway every day; their subway system is currently the largest in the world and considering population density that is a massive amount of impressions that companies are missing out on.

Escalators going to the subway are underwater..There have also been reports of sharks in the subways as well.

You’re breathing hard…You hear the growls coming closer…You speed up, you start to run…Then suddenly that awesome song you heard last week is playing; the growls are further and further away. No this isn’t an episode of The Walking Dead, let me introduce you to GPS-based apps.

If that caught your attention then you should take a look at a GPS-based app called Zombies, Run! Their tagline from the website is “Get Fit. Escape Zombies. Become a Hero.”I heard about Zombies, Run! through word of mouth via my zombie obsessed friends.

Looking further into the company responsible for actually getting me walking and sprinting outside my house is Six to Start.   They’ve also developed other “interactive stories” for the entertainment industry specifically for Death Cab For Cutie and Muse. The company also integrates Twitter, Foursquare and other forms of social media; the stories aren’t necessarily separate apps but there’s a main site that ties it all together if not on an app interface.

In Laura Kittner’s class this past Tuesday she mentioned that the emphasis in the advertising industry is changing over from outbound/one-way marketing (e.g. newspapers, TV Commercials) over to inbound/multi-way marketing (e.g. apps and social media). I honestly think it’s great considering I used to play a lot of ARGs (Alternate Reality Games) where it would be an interactive story. While playing an ARG, the players interact with the characters directly then go on to post what information they gained from the characters in the forums. ARGs are like Laura mentioned about content marketing; a company could sell camping gear but they won’t mention camping gear in their Facebook or Twitter posts.

If you’d like to read more on Alternate Reality Games or interactive GPS – apps you’ll enjoy the links below.

GPS on iPhone app for Harrod’s

Your Facebook Fans Are Hiding Your Posts At An Alarming Rate « Joe The Flow.

What an interesting post….This connects to what I mentioned about Facebook. I do think it`s a good tool but you need more than it if you`re gearing your business towards the “new marketing“ angle. New marketing is interactive and most of it is social media as well as client based. Old marketing is more of a selling the product/service to a person versus the new marketing idea of looking at the customer’s needs and wants. I gathered most of that from our guest speaker in Media Studies class with Laura Kittner.